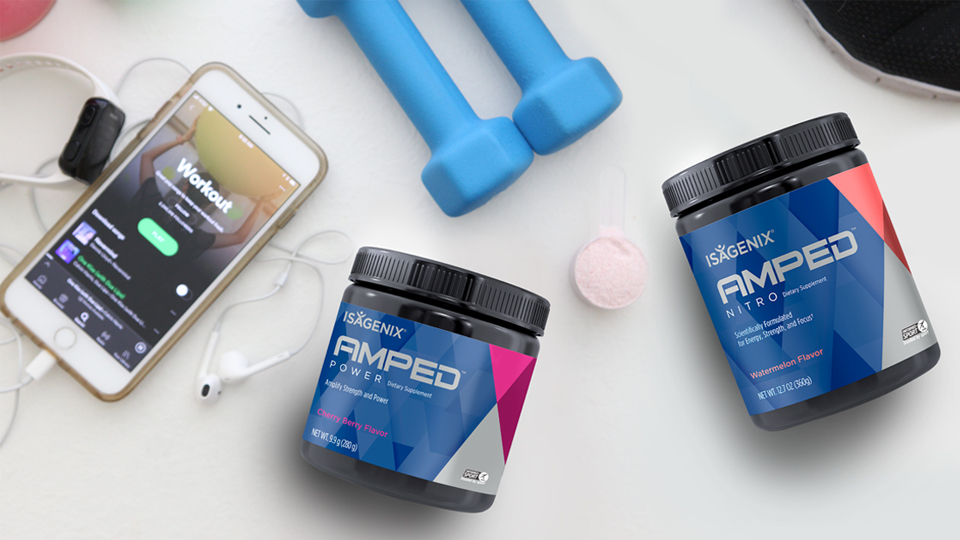 It’s 30-60 minutes before your workout — that perfect window to reach for your pre-workout supplement. And if you’re drinking either AMPED™ Nitro or AMPED Power, you’ve chosen an ideal pre-workout. Isagenix formulated both AMPED products to energize your muscles, stimulate muscle growth, maximize your body’s response to exercise, and support blood flow.

And now, both AMPED Nitro and AMPED Power have been clinically demonstrated to improve exercise performance in a double-blind, placebo-controlled study from the University of Pittsburgh. The study, published in the Journal of Strength and Conditioning Research, reported that both AMPED pre-workout supplements improved performance outcomes during a series of exercise tests (1).

In the study, researchers recruited 30 young, active men and women (15 each) who consumed AMPED Nitro, AMPED Power, or a calorie-matched placebo beverage just before and during a battery of anaerobic (power) and aerobic (endurance) exercise tests. They also measured the impact of the supplements on blood chemistry, vascular blood flow, and cognitive and mood responses.

The study found that supplementation with either AMPED Nitro or AMPED Power increased anaerobic power and vascular blood flow when compared to the placebo. Moreover, AMPED Nitro also increased aerobic endurance (VO2 peak time), suggesting that the subjects could perform the exercise test protocol for a longer duration.

As noted by co-author Paul Arciero, Ph.D., from Skidmore College, “The ~4% improvement by AMPED Nitro for both anaerobic and aerobic power may not seem like a significant improvement; however, these increases may be the difference between winning the 2016 Olympic 400-meter sprint or finishing in fifth place.”

There were no significant differences observed for cognition, mood, or anabolic hormones with any of the supplements.

The findings from the University of Pittsburgh clinical study support the use of either AMPED Nitro or AMPED Power as an effective pre-workout to help optimize your athletic performance goals. So, what are the differences between the two?

First, as the original pre-workout, Isagenix formulated Cherry Berry Flavor AMPED Power with creatine, citrulline, and patented Nitrosigine®§§ as key bioactives. Creatine is one of the most commonly consumed supplements for increasing muscle mass and muscle strength. The choice of citrulline and Nitrosigine® is to support cellular generation of nitric oxide, a primary signaling molecule that facilitates the necessary blood flow required to deliver nutrients to exercising muscle while transporting waste away from the tissue. AMPED Power, like AMPED Nitro, is an excellent source of vitamin C, providing 30 milligrams per serving.

For those individuals who either do not desire the effects of caffeine on their performance or do not like the occasional nontoxic itchy or burning effect of beta-alanine, AMPED Power is for you. Alternatively, you can confidently mix and match each product or choose to use AMPED on non-workout days since the bioactives in both products can benefit overall health and wellness.

In conclusion, whether you’re a weekend warrior or a trained athlete, these study results support your choice of either AMPED Power or AMPED Nitro the next time you want tangible benefits for your workout routine!